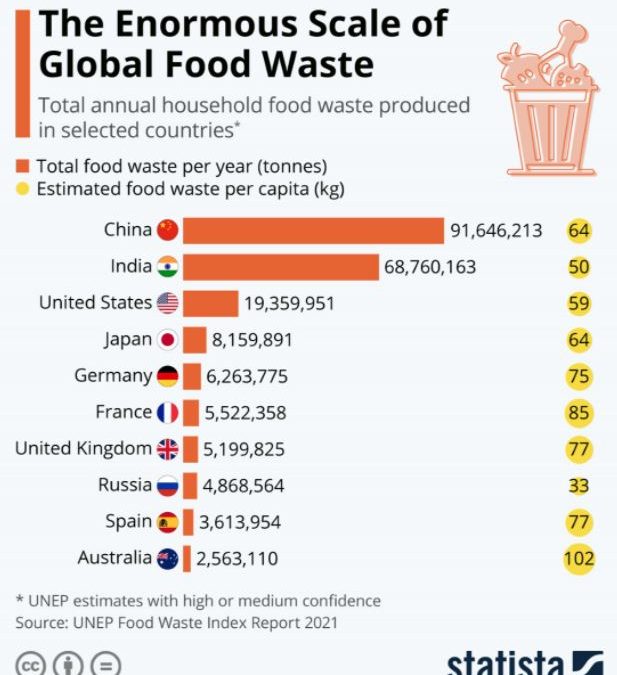 The issue of global food waste is quickly becoming a billion tonne problem. According to the United Nations Environment Programme’s 2021 Food Waste Index, the world produces 931 million tonnes of food waste every year, 569 tonnes of which comes from households. The remaining amount is attributed to the food service (244 million tonnes) and retail sectors (118 million tonnes). The average global household produces 74kg of food waste per capita annually and that figure is broadly similar across country income groups which suggests that widespread improvement is needed to tackle the problem.

The index states that if food loss and waste were a country, it would be the third biggest source of greenhouse gas emissions on the planet. So just how wasteful are individual countries when it comes to food? The highest absolute figures for food waste were unsurprisingly recorded in the two countries with populations of more than a billion people. China wastes an estimated 91.6 million tonnes of food per year while India discards 68.8 million tonnes. The U.S. is a little further down the ranking with 19.4 million tonnes of food waste while in Europe, France and Germany produce between five and six million tonnes annually.

Things look rather different when it comes to waste produced per capita. For example, the average household in India discards 50kg of food per year while that rises to 59kg in the United States. Despite appearing to have a relatively low level of total food waste compared to other countries with 2.6 million tonnes per year, the index shows Australia as having a high level of per capita waste at 102kg per household per year. By comparison, Russia’s total household waste comes to an estimated 4.9 million tonnes each year with waste per capita only coming to 33kg.